When an art historian talks about simulation

Simulate: from “simul” (together) and “similis” (similar): to make similar, and therefore represent, imitate.

From which derives simulacrum, with a double meaning: “statue representing a divinity”, or “appearance”, “shadow”, even “ghost”, as we will see in Plato.

Simulation as creation.
If you believe in the magical power of artistic creation, ‘simulating’ through art is practically equivalent to recreating a reality: eg. for the hunter who painted bison in Lascaux in the Palaeolithic, convinced of evoking them and making them materialize outside the cave, or for the Athenians of the 5th century BC. who recognized the embodied presence of divinity in the statue of Athena in the Parthenon.
Simulacrum in this sense will then also be the altarpiece venerated in the Middle Ages, resplendent with gold: sometimes the man of the town would get furious against the image of Judas, or of a demon, scratching it. What is this but the belief that there, on the painted table, the figure of evil is in presence? Once again the simulated representationsomehow replaces reality.

Simulation as deception.
Plato, on the other hand, warned that all sensible reality is, in fact, an imperfect image of the world of ideas: see the myth of the cave in which men deceive themselves by mistaking mere shadows for real things; the artist, by producing simulacrum/shadow copies, will thus be tainted with a double delusion.

Art as imitation.
Despite this opinion of Plato, in antiquity there was the concept that one of the most wonderful aspects of art was its ability to simulate Nature by imitating it:for centuries the best way to praise a painting was to say that it was almost indistinguishable from the real object, as in the famous example narrated by Pliny of the grape so well painted by Zeusi that the birds tried to peck the berries. The appreciation of naturalness is gaining ground not only in the figurative arts, but also for example in the art of rhetoric: Cicero praises a speaker’s ability to enchant and captivate an audience with words that flow effortlessly, when in reality the speech it is the result of years of practice, study and elaboration of rhetorical devices.

Ars est celare artem.
This is the concept of the ars est celare artem: an expression will be all the more natural the more it has been possible to hidethe preparatory effort necessary to achieve it. Practical corollary: the long exercise of repetition of a technical gesture leads to a fast, effective and apparently simple and natural execution, like a pianist who easily executes a sonata that is technically very difficult or a surgeon who with skilful and safe movements puts an end to a delicate intervention in a short time.

Recreate by analogy.
After centuries of Middle Ages dedicated to the afterlife, Renaissance humanism rediscovers the beauty and dignity in creation and wants to celebrate it with the colors of art. However, the imitation of Nature becomes analog, and not servile: art imitates reality in an idealized version, enhancing its clear light, its harmonious proportions, and its geometric perfection and perspective.

The idea of ​​artistic representation as a convention was born, useful for aesthetic purposes or philosophical speculation: a simulation declared as such, but no less necessary for that (although art rarely seeks the useful purpose, instead of the didactic simulation).

Of course, however, the two medical saints Cosma and Damien do not think of acting in a simulation scenario when they literally ‘glue’ a leg taken from a brown corpse to a patient, in the predella painted by Beato Angelico!

Dissimulation.
Leaving aside Leonardo and his figuration of the ‘movements of the soul’ based on anatomical studies (the novelty of the Milanese Cenaclelies precisely in the very human reactions of the apostles to the announcement of the betrayal), in the 16th century the meaning of simulation resurfaced as lie. Sensitive to religious torments and courtly intrigues, Vincenzo Danti and Bronzino created works such as Honor that Conquers Deception or the Allegory of Love in the Museum of London, in which the monstrous girl with the body of a dragon holds the honeycomb in one hand (sweet flattery) and in the other a poisonous sting.

The emblem of deception, invented by Michelangelo, is the mask: as in the Allegory of the Night of the New Sacristy, the mask is associated with the deception of dreams. In the intriguing portrait blanket at the Uffizi, he hides his face in a game of dissimulation: “SUA CUIQUE PERSONA”, “to each their own mask”.

Trompe l’oeil.
The Baroque will mark the apogee of illusionism, understood as a technique to amaze (“the aim of the poet is amazement”) simulating a reality that does not exist. We are in the era of the triumph of theater and scenography: let us think of the false skies populated by clouds and fluttering angels that illusionistically ‘break’ the ceilings of baroque churches.

By the way, returning to simulation in medicine, I reflected on the appropriateness of the acting and identification component in those who participate in the scenario, both with a manikin and with a ‘fake’ patient equipped with devices. The verisimilitude to which baroque art aspires (see also Caravaggio’s naturalism and the birth of the still life genre in relation to the new Galilean experience) rests on the concepts of immersion and conviction, on an involvement of the mind and the senses.

The age of disappointments.
When a mechanical means of faithful reproduction such as the camera has been invented, what is the use of painting a portrait with realistic intentions? Art once again probes the invisible, the abysses of the psyche and the imagination.

To us moderns the cross of disappointment: Magritte explains to us that “this is not a pipe” (Ceci n’est pas une pipe); the convention of identity between the real object and its simulated representation collapses: art pretends to be false. Too bad, I preferred it when I fed on the bison I had painted in the cave!

Animus.
Animus. However, there remains one last important myth to mention, and that in a medical context like this, I could rather rashly define as ‘the resuscitation myth’.

Pygmalion, according to the ancient Greeks, carved a statue depicting a girl so beautiful that he fell in love with her: he implored the gods to transform her into a woman of flesh and blood, and his prayer was answered.

It is the idea that man can infuse a part of his spirit into formless matter, molding and animatingit: blowing the animus, the breath of life. The same gesture of God that gives life to Adam in the Sistine Chapel, Michelangelo turned to the block of marble with which he made the Prisons, which struggle to free themselves from the inertia that still overwhelms them.

The myth, eternal and current, therefore goes through Geppetto who creates a simulacrum of a child: the puppet Pinocchio, who, however, through love and dedication, will be granted the definitive metamorphosis. The artist-demiurge gives form, and therefore beauty, and therefore life: the doctor has the task of protecting and restoring this threatened, weakened, compromised life. Easy to say? The true Art lies in hiding the Art. 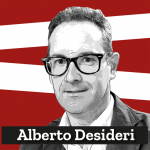