CPR in the mountains and Motion Tracking

Simulation was used to detect how CPR quality changes at high altitudes and how movement monitoring can be used to design training interventions.

Welcome back to our Pub,

Today we will taste a first beer brewed in the high mountains and produced by several alpine breweries, specifically in the terraXcube laboratory, a hypobaric chamber that simulates the high-altitude environment.

These breweries had rescuers perform cardiac massage on a manikin that recorded the position of the hands, the speed of the thrusts, and their depth, while the brewery’s research team monitored respiratory rate, saturation, and heart rate.

At 3,000 meters and even more so at 5,000, after a minute, a minute and a half, the depth of the compressions dropped below the predicted threshold of two to six centimeters and the reaction times of the rescuers were slower.

The cause of the performance degradation lies in the effect of oxygen depletion (all of us at PubSIM thought they were actually drunk!).

At 5,000 meters, the brewing team recorded significant drops in oxygen saturation reaching peaks below 78 percent. The study therefore suggests that it would be advisable to anticipate the change in cardiac massage before the two scheduled minutes, or to consider equipping the helicopters that operate at high altitudes with automatic massagers. Our brewmaster recommends drinking less, especially at high altitudes!

The second beer we offer is a foreign drink produced with similar technology as last month, but in this case, instead of tracking eye movements, body movements are analyzed during the execution of a task. In this study, the authors examined the slow-motion movements of experienced and novice obstetricians using “Motion Tracker” software (Kinovea ©) during the execution of the forceps fetal extraction maneuver. From a simple video recording, the software allows distances and times to be measured manually or by semi-automatic tracking to follow the points and check the values ​​and trajectories of the movements of the photographed subjects.

The Brewers have suggested that differences in movement between experts and novices can be used for simulation training with these young doctors.

Our Brewmaster suggests drinking this beer very slowly (it is slow motion, after all!), so we can brainstorm together about the possible use of this technology in future simulation and training courses.

I hope you liked this tasting too, I’ll wait for you at the next meeting to taste new beers and for those who want to talk about the ones they already drink.

See you soon,
your Brewmaster 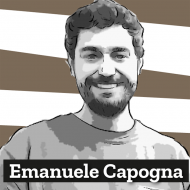