Gwen, a manikin who has Down Syndrome

The mission of Lifecast Body Simulation is to make manikins that look like real people! This outlines their journey to produce the Gwen manikin, a little girl with Down Syndrome. And we also listen to her version of the story

Can you imagine sending your little girl to school knowing that the teachers, first aiders, paramedics and other healthcare providers she may need have not been adequately trained (or worse incorrectly trained) to deal with her health needs?

That is the situation faced by so many parents of children with complex health needs.

If you think about it, most manikins are very generic: they encourage a head tilt, chin lift during resuscitation, and allow for the teaching of ‘generic skills.’

Yet a child with Down Syndrome is anything but generic: they have quite complex healthcare needs, they cannot be head tilted due to neck instability issues relating to their C1 and C2 vertebrae. They can have complex congenital issues, and suffer from apnoea.

In the early part of 2022 our team at Lifecast Body Simulation were approached by Charles Everard and Lee Jagodzinski from Greenwich Learning and Simulation Centre (GLASC) in London to consider jointly collaborating and building a child manikin with Down syndrome.

We struggle to understand why it has taken until 2022 for the industry to build a manikin with Down syndrome, but we at Lifecast accepted the challenge with huge excitement.

“It has never made sense to us why we do not have manikins which look like real patients!“

We have observed that the more real the manikin, the greater the depth of the learning conversation, and more seriously the student takes the learning.

Initially we did a shout out for help through social media, hoping that one of our contacts may have a relative or friend who has Down Syndrome who wanted to be copied and turned into a manikin, but we drew a blank. So as a next step we turned to the Down Syndrome Association GB for help. Their team was amazing and sent an email asking for help amongst the thousands of parents and members of their association, and we were subsequently inundated with offers of help.

Amongst the hundreds of children who offered their time and support we received a photo of Gwen. She was photographed doing a TED talk about having Down Syndrome: Gwen is an actor, a model and importantly she has her own “modelling agent”, and one of the most incredible families and stories it’s been our privilege to meet.

Physically Gwen epitomises many people with Down syndrome. She is a joy and yet has had significant health issues.

Though not all people with Down syndrome have the same features, some of the more common features include: flattened face, small head, short neck, protruding tongue, poor muscle tone, relatively short fingers and small hands and feet with gapping between toes, among others. Children with Down syndrome are at an increased risk for certain health problems, such as respiratory infections, heart defects, thyroid disorders, hearing loss, sometimes severe, vision disorders, sleep disturbance, obesity, spinal problems, dementia and other health conditions

Gwen has faced the majority of the issues mentioned above, and it was for this reason that we at Lifecast Body Sim chose to work with Gwen and her family.

What did we do?

After a few weeks of chatting with Gwen and her acting / casting agent we settled upon a date for Gwen and her family to join us at Lifecast Body Simulation and went through the safeguarding steps which ensured we had completed the appropriate child protection paperwork, and local education authority approvals to allow for Gwen to undertake paid work in her school time.

We firstly did a tour, showing Gwen where key things are filmed, ‘The Crown’ by Netflix, ‘Strictly come Dancing’ and a whole host of movies including Paddington! We then showed Gwen what our manikins look like when they are finished, spending time with our artists.

Next, we began the 3D scanning process. Our Lifecast 3D scanning tool takes thousands of photographs in a minute, which it uses to render a 3D image. The 3D scanned is incredibly accurate and sensitive allowing for tiny details to be captured with an accuracy of 1/10th of one millimeter. The 3D scanning was overseen by the famous artist Schoony, who is also one of the directors of Lifecast Body Sim. Schoony uses 3D scanning to produce pieces of collectible art which sell for tens of thousands of pounds to his often famous collectors, such as Brad Pitt, Angelina Jolie or Benedict Cumberbatch.

Once we had a 3D scan of Gwen we undertook lifecasting of her hands and feet. Lifecasting is a process developed by John Schoonraad in the 1980s as a way of copying people for his movie manikins. John had developed a way of using plaster of Paris and Alginate to copy physical features and make molds: this had led him to work on hundreds of movies as a prosthetic maker including ‘Saving Private Ryan’, ‘Gladiator’ and ‘Kick Ass’, thus he was keen to work with Gwen to copy her feet and hands. Lifecasting is a messy process, but allows us to get our limb sizes and physical features accurate and these days is intertwined with 3D scanning tech.

From a lifecast body part we can create a plasticine / clay which our artists can refine. Once Gwen had been copied, the team of sculptors and mould makers began the process of making the internal skeletal moulds and the outer skin moulds. The process involves our incredible sculptors whose backgrounds often include time served at Madame Tussaud’s museum.

The process took about 20 weeks from the initial scan to final production.

Launched at the ASPiH and Resuscitation council congress in the U.K. the manikin is now heading to America to be showcased at IMSH 2023.

Personal note from the real Gwen…

My name is Gwen and I am the model for the first Down Syndrome medical manikin. It’s about time that there was one! So when my mummy saw an ad about one being created I asked my mummy to volunteer me for the job.
I was really excited to be chosen because I know my mummy and daddy worry about my medical needs and want to know that I am cared for by medics who are automatically thinking about my needs, like they think of those of a typical child, thinking about my differences, as well as ways in which I am the same as others.
In an emergency the knowledge of my needs must come naturally rather than after thinking, owing to time being important for some problems.
I think I may have been chosen because I have the medical needs which are associated with Down Syndrome and so can help the most people.
In order to model for the manikin, I was really excited that I had to go to London. Mum and dad told me about the film sets, which they were super excited about, but my brother was most interested in the dummies and manikins and how they were made. I was looking forward to all of it!
I had casts done of my hands and feet. Big brother had to persuade me to do that by showing me that it wasn’t scary to put my hands and feet into a bag of gunk !!!! I made him do it first and he seemed to be okay so I tried it and it wasn’t as bad as I thought. I had my body scanned. I loved that part. I could see myself on a screen and it really looked like me. I was really interested in the computers and, of course, I wanted to see my brother’s face on screen too! He looked funny and put his tongue out at me.
I got to look around the studios and touch things, but the best thing about the whole experience was the people. They visited me at home afterwards to take some more scans and were really fun and thought about what I like and don’t like a lot. They listened to me and took my choices seriously, letting me be in charge. I tried to eat one of my foot molds as I had to check how solid it was, so they told me they would get me a chocolate foot after the launch of the Manikin. I am looking forward to that!!!!
I’ve seen pictures of Gwen Manikin and I thought they were pictures of me in hospital. I can’t get my head around it being a manikin and look forward to meeting Gwen Manikin in person. What I am most excited about is the difference it will make: it is genuinely life-saving and, as I said at the start, it’s about time! 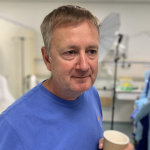 Designer of manikins, educator and thinker.